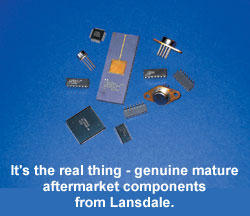 Once upon a time, you could buy a “genuine” Rolex watch on a New York City street corner for $25 – right next to the pushcart vendor selling Sabrett hot dogs. It looked good, and might even tell time for a while. When you bought it, you knew for sure it was a fake, and would probably turn your wrist green, but you bought it anyway. The Sabrett hot dog would have been a much better investment. Buying counterfeit electronic components is another matter entirely. Cheap to begin with, they end up being very costly in terms of failed product, and could even cause catastrophic failures and death in medical, aerospace, and military situations.

Overall, counterfeits have been good for the honest manufacturers and their authorized distributors because the fear of counterfeit product has changed the way we procure parts. For example, many OEMs are putting new requirements in their purchase orders and/or Terms and Conditions which will hopefully avoid counterfeit products. Their Terms and Conditions require the seller to either be the manufacturer listed on the QML/QPL for the product or an authorized distributor or at least to have full traceability for the product.

Industry groups are also looking at counterfeits and what can be done about them. A few years ago the GEIA G-12 committee produced an Engineering Bulletin on Counterfeit Avoidance. This document advocated the procurement of product from the manufacturer or the authorized/franchised distributor. If this was not possible, it gave instructions for inspection and testing that would help to mitigate the risk of counterfeit product being used in an aerospace system.

Then in 2009, the SAE G-19 committee also wrote a document about counterfeit product. This document, AS5553, was adopted by the DoD in 2009. The intent of this document was to:

“QSLD Program (Qualified Suppliers List of Distributors). The purpose of the QSLD Program is to establish and maintain a list of pre-qualified sources for certain electronic components that are purchased and managed by the Defense Supply Center, Columbus (DSCC). QSLD products are provided by suppliers that combine accepted commercial practices, quality assurance procedures that are consistent with industry and international quality standards, and tailored when necessary to product-unique requirements that can take the place of provisions traditionally stated in DSCC solicitations.”

As part of this change, there is a new clause for 52.209-9028 on DIBBS solicitations for 5961 (semiconductors) and 5962 (microcircuits). Only the manufacturers listed on the QML/QPL for the device or distributors listed on the QSLD are eligible for award.

Prior to the QSLD program, DSCC, as well as other government procurement agencies, interpreted the FAR (Federal Acquisition Regulations) and the DFAR (Defense Federal Acquisition Regulations) as requiring that product be procured from the lowest bidder. Because of years of government purchasing based on this interpretation, there is now concern that government stores of products are riddled with counterfeits. If so, this is a ticking time bomb just waiting to infiltrate our nation’s weapons systems, and could have disastrous results. Do we really want our military aviators to take off in what are potentially flying coffins?

It was stated in a recent article that DSCC has had less than 10 confirmed receipts of counterfeit electronic items. The question is, what happened to the suppliers of those items? Have they been debarred? Have they been indicted on charges of fraud? Or have they even been investigated? Has there been any notification to warn other users that these sellers are known to sell counterfeit products? If any of this has happened, it has been kept as a deep, dark secret.

The article also stated that DSCC differentiates between “Counterfeit” and “Non-Conforming” parts – including unauthorized product substitutions – and quotes a DSCC spokesman as saying, “We will aggressively go after any supplier that knowingly provides us non-conforming or counterfeit product.” What does this mean in practice? Again, if the government is going to stop the sale of these counterfeits or unauthorized substitutions, they need a much more aggressive policy of debarment and criminal prosecution.

So how do we go about disarming this ticking time bomb? How do we verify whether an inventory of millions of parts with thousands of part numbers is actually good product? The first step is to figure out who the product was purchased from. If it was procured from the original component manufacturer, an authorized aftermarket source or an authorized distributor, the odds are extremely high that it is the real deal, so we probably don’t need to worry about it. Maybe.

If the product was procured from an independent distributor or broker, then a much more careful examination is required, which can be done by using the guidelines of AS5553 as adopted by the DoD. If the product is found to be counterfeit, then several things must happen:

The distributor or broker should be immediately debarred from doing business with the government. This will stop continued input from a known seller of counterfeit goods. All products in inventory from this seller need to be impounded until they can be examined. This will stop other possibly counterfeit inventory from being distributed to end users. Then the information and the counterfeit product should be turned over to the Defense Criminal Investigative Service (DCIS) and/or the FBI so that they can pursue a case of fraud against the seller.

The Department of Commerce just recently released a new document: “Defense Industrial Base Assessment: Counterfeit Electronics”. This stunning 243-page assessment took more than two years to produce and is full of facts, charts and graphs. It shows that the reports of counterfeit products have risen 140 percent from 2005 to 2008. Another interesting fact is that counterfeits have been shipped from every facet of the supply chain – brokers, independent distributors, authorized distributors, and even original component manufacturers. “How can this be?” you ask. In the case of the original component manufacturers, it has to do with a policy of accepting returns for convenience and then restocking them. This situation has also affected the authorized distributors as well as their tendency to make purchases from “non-authorized sources”. It would seem that original component manufacturers and authorized distributors must now add to their overhead by testing product returned for restocking – and charging a high enough restocking fee to cover such costs and possibly discourage criminals.

Another interesting fact that has been brought to light is in the area of out-of-production parts. Normally we assume that the reason that a counterfeit was procured is because the part is “out-of-production.” This is not the case. For authorized distributors, nearly 75 percent of the counterfeits encountered in 2005 were still in production by the original component manufacturer (OCM) and in 2008 it was still over 45 percent. So nearly half the time the counterfeits seen by authorized distributors were of products that were still being manufactured by the OCM. For the independent distributors and brokers during the same time period, these numbers are quite a bit lower with somewhere around 25-28 percent of the counterfeit parts still in production by the OCM. Since these independent distributors and brokers generally specialize in hard-to-find parts, it is understandable that their rate would be lower.

These numbers do not include product from aftermarket manufacturers. Now when you consider that the aftermarket manufacturers have been buying product lines from the OCMs and supporting those products for over 40 years, it is very likely that probably over 90 percent of the counterfeit products found in the supply channels are still in production from a reliable source. So why is there so much counterfeit product in the system? It’s because we rate buyers and engineers based on cost and schedule. Faster and cheaper really don’t work if the product is fake.

We had talked about purchase order requirements and Terms and Conditions that contractors and subcontractors are using today to combat counterfeits. These requirements are keeping the honest sellers honest. But they don’t address the basically dishonest seller who is knowingly dealing in counterfeits and doesn’t care what the purchase order or the Terms and Conditions say as long as he gets paid.

After manufacturing mission-critical, hi-rel military and commercial semiconductors for over 40 years, Lansdale Semiconductor has expanded its product offerings by manufacturing some of the electronic component industry’s most popular, and in demand, RF and wireless ICs.

Lansdale was founded in 1964 to supply aftermarket germanium transistor product lines from the Philco-Ford Company in Lansdale, PA. The company relocated its headquarters and manufacturing facilities to Phoenix, AZ in 1976, after acquiring a product line from Motorola.

As the “semiconductor aftermarket” pioneer, Lansdale recognized the critical need for a long-term manufacturing and supply source within the global IC industry and implemented a strategic plan to fill that need by acquiring a series of mature IC product lines from several of the world’s leading OEM chip makers, becoming a leading supplier of semiconductor aftermarket ICs.

eComp is a specialty distributor and authenticator of products for the military, aerospace, medical and industrial marketplace. We provide authenticity verification / value added services for legacy components and can offer engineering assistance and custom replacement solutions for obsolete products and systems.