During the counterfeiting process, many counterfeiters will resurface or remark a device to falsely represent a lower grade part as being a higher quality device. Multiple tests are available during the counterfeit mitigation process that allow testing facilities to determine if a device has been remarked or altered in any way. These tests are considered ‘Destructive Testing’ because once parts are subject to solvents, they are unusable in other applications.

Marking Permanency Test
eComp utilizes the standard three parts mineral spirits to one part Isopropyl alcohol to test the integrity of the device’s markings regardless of the environment the device is exposed to.

Solvent Test for Resurfacing – Acetone
In order to ready the surface of a device for remarking, often counterfeiters will sand the device and reapply blacktop in order to obscure tampering with the original markings. Acetone is used to determine if non-epoxy blacktop has been applied to the part by swiping a section of the device and observing if there is transfer between the device and the object used to swab the device (usually a q-tip).

Scrape Testing
eComp also performs a scrape test, which is a method to determine if a clear coat has been used to conceal the use of blacktop or device tampering. A sharp blade is used to scrape the surface of the device. Flaking or peeling on the device could be evidence that a part has been treated with a coating to make it resistant to acetone in an effort to circumvent testing.

Solvent Test for Resurfacing – 1-Methyl 2-Pyrrolidinone
Parts are also resurfaced with compounds that can circumvent the acetone testing. Another methodology employed by eComp is the use of a 1-Methyl 2-Pyrrolidinone solvent. The device is submerged in the solvent and left for a pre-determined amount of time. When the part is removed from the solvent, it is checked to see if there is transfer of blacktop between the device and the object used to swab the device. 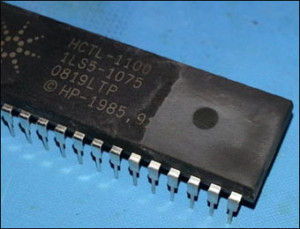 Solvent Test for Resurfacing – Dynasolve
eComp also uses Dynasolve to determine if a part has been resurfaced by suspending a device in a solution of Dynasolve for a pre-determined period of time and then observing the results once the device is withdrawn from the solution. The comparison of the two sides of the device allow for observation of any aberrations on the portion that has been submerged.

Lead Finish Evaluation
During the Lead Finish Evaluation, the devices are subject to EDX (Energy Dispersive X-ray) analysis to determine the element makeup in a particular spot on the device. This process is used to evaluate the device and to verify the presence or absence of elements that could lead to the determination of the part’s authenticity.

Delid/Decapsulation Internal Analysis
While the exact technique varies depending on the packaging, Delid/Decapsulation processes expose the internal cavity or surface of the device to allow further analysis of the device via microscopy. This process can help to prevent the inclusion of counterfeit devices into a finished project and aid in identifying defective materials or devices that exhibit anomalies including, but not limited to corrosion, damage, and/or foreign materials introduced to the internal package cavity.

Back to the main Counterfeit Mitigation page.

eComp is a specialty distributor and authenticator of products for the military, aerospace, medical and industrial marketplace. We provide authenticity verification / value added services for legacy components and can offer engineering assistance and custom replacement solutions for obsolete products and systems.